SPANISH CHRISTMAS IN THE EYES OF A FOREIGNER

Last Sunday we ended up our family lunch with a discussion about what is the Spanish way of celebrating Christmas. Do we still maintain our traditions? Did we ever have as many traditional rituals as they do for example in some other European countries? We do have five different nationalities in our big family, so comparisons run wild…

I learned and reviewed a few things, such as the fact that Spanish Christmas is never as solemn as a northern European one. The spirit is more “Let´s eat & drink, it´s Christmas”! This I am writing today is not an expert view or cultural dogma – just a description of Spanish Christmas basics in the eyes of a foreigner living in Cantabria, northern Spain.

In the beginning of December usually around the 6-8 of December, bank holidays in Spain, street decorations and lights come up. Big budgets (now lower than some years ago) are spent on neon Christmas motives. Typical Spanish (?) reindeers, stars and snow crystals are popular returnees that bring a blueish light to the shopping streets. Buy this and buy that!

The festivity kicks off for real the 22nd when the national Christmas lottery spreads money around the nation. The whole country follows this live broadcasted lottery where kids sing the winning numbers on national TV and radio. Celebrations are big in the office, all bars and public places where a sort of morning Christmas party takes place.  Everybody is waiting for el Gordo – the big winning number! The TV ads announcing the lottery is one of the biggest contracts of the year for PR and media companies… A good lottery ad is a gold mine in any copies or producers CV. This year is an authentic piece of short movie with a story shedding tears around the nation. In times of crisis this friendly barman saves a lottery ticket for his friend (probably unemployed) who wants to congratulate the winners of the number sold in the bar of his good hearted buddy… Even though in Spanish, give it a go here.

The kids singing out the winning numbers… See how it can look like! on Spanish national TV!

Later on the 24th people head home early or at least leave their office early to spend some time at the bar with work mates, colleges or family & friends. A few zigzag home dragging their Christmas basket – a box full of Spanish gourmet goodies like ham, cheese, sweets, wine and brandy… This company gift is often included in the workers contract. Serious stuff!

Christmas cards -apparently a British tradition from the middle of the 19th century- became popular in Spain at the end of the 19th century. Today in Spanish it is simply called “Crismas”, just as typical as the “nice café con leche” in English!

Once at home, lucky families gather for late dinner on the 24th with appetizers like Ibérico ham, big prawns, cured Spanish cheese, followed by the main dish, usually lamb or turkey. This is more varied than for example in Sweden where roasted ham is the star on the Christmas table.

What about the drinks? Well, of course, Cava. And, if you are refusing to drink Catalan products because you have the bad habit of mixing politics and gastronomy, you drink northern Spanish sweetened cider from Asturias (not the fresh one but the sweet lightly carbonated one…). Wine is also there of course, and always Spanish wine.

When we reach the dessert there is the sweet sorting table of turrones  (almonds and sugar based tablets), marzipans, and other typical candy. The Clarisas nuns in Villaverde de Pontones, Cantabria, are supposed to make one of the best turrones in Spain… Try them if you pass by.

And what about the Christmas tree? Well, nowadays it is a must to have a plastic Christmas tree at home, but this was imported from northern Europe as well as the Santa. Some families make Santa appear and give some small gifts on the 24th at night but the big present day is otherwise the 6th of January. But more about that later on…

Returning to Santa it is interesting how the different regions in northern Spain have their own Christmas figure. In the Basque country he is called Olentzero, El Apalpador o Pandigueiro in Galicia, L’Anguleru in Asturias and El Esteru in Cantabria. All of them big woodcutters, coal miners or fishermen wearing different berets with a little too much cider or orujo in their bellies…They have long tradition, in some cases recently recovered, and many followers around the northern regions. 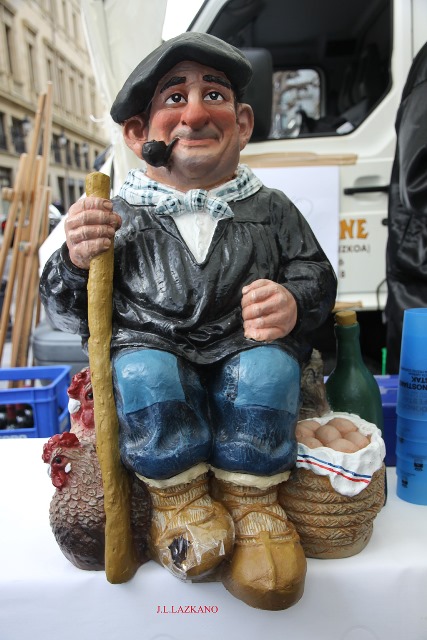 Then the red Christmas flower is there of course (so commonly called Nochebuena “Christmas Eve”), and in several homes, stores and public places you may enjoy the biggest Nativity Scenes – El Belén. This is a big family thing to do at Christmas. Put it up at home and go check out the public ones!  Another thing is the must wear red underwear but this is more common New-year´s eve… Red is the color to celebrate life during the darkest period of the year. Yes, even in sunny Spain. Not wearing it is supposedly one year without any close romantic action…

New-year´s eve is something else in Spain. As in Madrid, where the bell tolls 12 times at la Puerta del Sol to celebrate the New Year, almost every region has its own “favourite public clock” to celebrate around. With every toll 12 grapes are to be eaten and a lot of superstition is to be found around this if you fail to eat them, choke or just don´t want to. The origin of this tradition dates way back until 1909, when a huge grape harvest excess occurred and the farmers asked for help so that they would not waste the surplus… It really became popular and since then it is a tradition.  And, do not forget your red underwear, to wear something new and something old, or to dive a golden ring in your drink for the first toast of the New Year.

At last but not least is the Cabalgata or the arrival of the Three Magic Kings or Wise Men to every Spanish town. They come with candy and presents for the kids that the parents or family members ordered and asked for… One of the most genuine and theatrical ones is of course in what some people call the prettiest town in Spain – Santillana del Mar, Cantabria. The biggest media one takes place in Madrid. 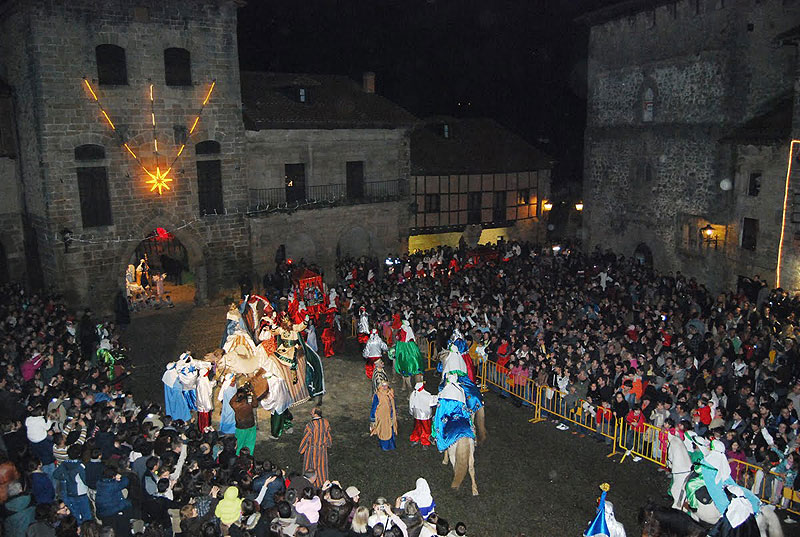 What about the kids that didn´t behave, or forgot to put some candy for the kings and some water for their camels at home? They will receive a piece of black carbón (coal looking candy) and will have to do better for next year!

If you’re not of the kind that runs away in Christmas (ski and travel lovers mainly), you will end up exhausted , but happy to have spent more time with friends and family, and some people you don’t see very often. Also it is a great opportunity to help other people, as more and more are in need in  Spain.

Yes, there is a way of celebrating Christmas here, a way that mixes up old traditions with imported ones, crazed ads and credit cards with real feelings, but a time that brings the best of Spanish culture and personality when talking about enjoying life and being positive.

Although I also need the snowed quietness and peaceful way of celebrating I was used to when not living in Spain, in my memories I will always keep the never ending Christmas aperitivos, the fights over the last prawn on the table, the fine cut Spanish Ibérico ham brought home by a loving husband/father or wife/mother, the hammering sound of a pandereta (tambourine) or the day I found out you may peel the grapes before midnight on the 31st to make them easier to swallow with the bells.

Merry Christmas and all the best for 2015! Love, Dream, Travel, Live